The conversion of HTML into Word is one of the most requested functionalities of xmldocx.

Since v1.0 xmldocx offers pretty sophisticated ways to include HTML formatted content into a Word document. The purpose of this tutorial is to offer a detailed account on how one can do it and how to get the most of it.

There are currently two elements to include HTML into a Word document generated from scratch (the case of templates will be treated further below) with phpdocx:

The first of them uses internally the “alternative content” element available in the OOXML standard (on which Word is based) and it is simple to use although it has two main drawbacks:

This said, it may be an interesting option if none of the above represents an issue for a given application.

In what follows we will concentrate in the pdx:embedHTML element and the replaceVariableByHTML (its avatar for working with Word templates).

The main advantages of the pdx:embedHTML element are summarised in:

Let us now get down to the nitty-gritty.

Let us first offer a few simple examples that illustrate the basic procedures:

The code needed to insert some plain HTML is as simple as this:

Sometimes one may need to get the HTML and CSS from existing external files but as we will now show this also turns to be extremely simple.

Let us assume that the HTML code above proceeds from an external html page: simpleHTML.html that links to a CSS stylesheet: styles.css.

Then the following code will render exactly the same results:

Notices that the only differences are:

It may well be that we choose not to embed directly the HTML code into the document but rather insert it within another document element like a table or a header/footer.

This can be achieved in a very simple way by setting the rawWordML option to true.

We may modify slightly the previous example: 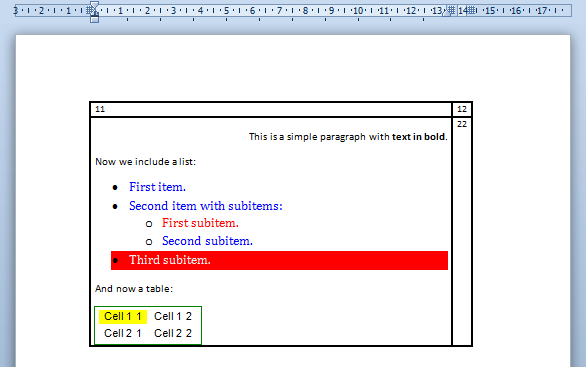 To include images is equally simple. One may choose to include the images within the document (with the attribute downloadImages set to true) or keep them as an externally linked resource (in that case you should make sure that the image is available to the final users).

A simple example that makes use of this simple web page with an image reads as follows:

Notice that like in this case we have not declared the width and height attributes of the image, xmldocx reads its properties from the image header and inserts it with a resolution of 96 dpi (default resolution). One may, of course, choose custom width and height to obtain the desired results.

xmldocx parses all the most commonly used HTML tags and attibutes.

It is important to take into account that the HTML and OOXML that Word is based on have different goals so at some points the translation from one to the other should include certain compromises that are not universally valid for all applications. Fortunately it is not difficult to find convenient workarounds that offer a close to perfect Word rendering.

That a tag is not parsed does not mean that its content dissapears from the Word document. It only implies that their associated HTML properties are not taken directly into account. Their childs and text content will be parsed and rendered with their corresponding styles into the Word document.

Currently almost all CSS properties, that are posibly applicable to a document, are parsed and translated into their Word counterparts.

In order to achieve the best posible results it is important to know how these CSS properties are applied and their known limitations regarding the final document rendering.

The following border properties are parsed:

The concept of padding has not a general direct counterpart in Word so it is usually interpreted as extra margin space.

This properties are partially supported:

The units may be pixels, points or ems and the colors follow the same scheme as above. The suported properties include:

xmldocx tries to adapt as best as posible the positioning properties of elements to equivalent Word properties. If you need to position precisely elements in the resulting Word document the best and simplest way is to use tables.

You may also instruct xmldocx to parse divs as tables (see, for example, above) or to parse floats with the "parseFloats" set to true (image floats are always parsed by default).

In any case results are usually pretty good and cover all but the most sophisticated examples.

The parsed properties include:

xmldocx handles pretty well the rendering f HTML lists and their associated CSS styles. Nevertheless, if you want to use bullets beyond the most standard ones you should the xmldocx embedding HTML element in conjunction with the createListStyle element (by setting the 'useCustomStyles' attribute to true) to obtain the desired results.

In order to do so one should create a custom style that mimics the HTML result and give it the same name that is used in the HTML code for the corresponding class or id attribute. xmldocx will automatically use the corresponding formatting (bullets, indents, etcetera) previously defined by us.

In any case results are usually pretty good and cover all but the most sophisticated examples.

In case that we do not bother to define any custom list style the corresponding CSS list style property is parsed as follows:

One of the nicest features of the embedHTML element is that it allows to use customized Word formatting for paragraphs and tables.

One may write plain HTML with little or none styling and yet generate a very sophisticated Word document.

The default base template already includes all standard Word styles for headings, paragraphs and tables. You may get all the available styles via the xmldocx parseStyles element.

Of course, yo may use a different base template that better suit your needs or even explicitely import styles from other docx via the xmldocx importStyles element.

Let us now go over a simple example that illustrates this functionality:

Notice that we have set the option strictWordStyles to true so the HTML parser will ignore the CSS properties and will apply exclusively the selected Word styles.

If one removes the option strictWordStyles or set it to false (its default value), phpdocx will try to combine the Word and HTML styles. 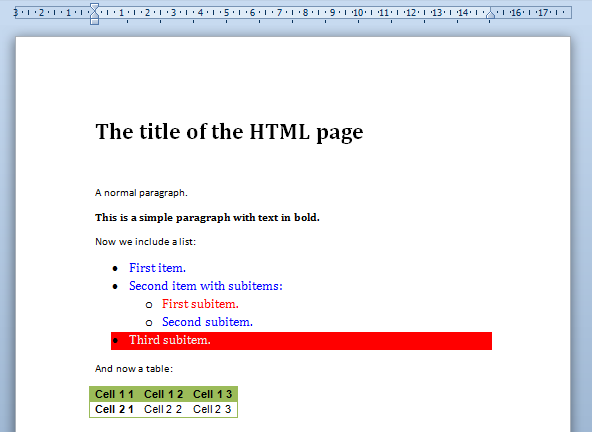 Besides all the options that have been carefully analysed before there are are other general options that we now pass to comment briefly.

All the precceding examples have their match in the case we are working with templates by means of the replaceVariableByHTML element.

All the available attributes are the same as before although we have to give two extra pieces of extra info, namely:

A simple example will better illustrate all this.

Let us start with a simple template that looks like this: 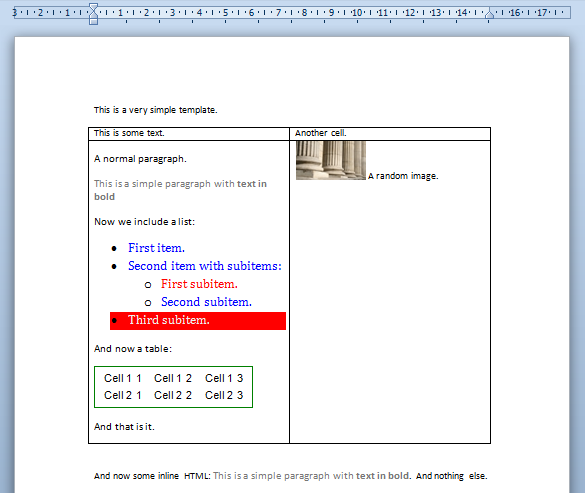 Thus, it is possible to insert headers, footers, comments, table of contents, cross-references, sections and many other contents. All of it integrated with the supported HTML tags and CSS styles.

An easy example of use of HTML Extended would be the creation of a DOCX with bookmarks, breaks and cross-references:

All the documentation regarding this feature is available in the HTML Extended page.